We've been threatened, smeared and fired - but we've made it to our fifth birthday and we're still going. 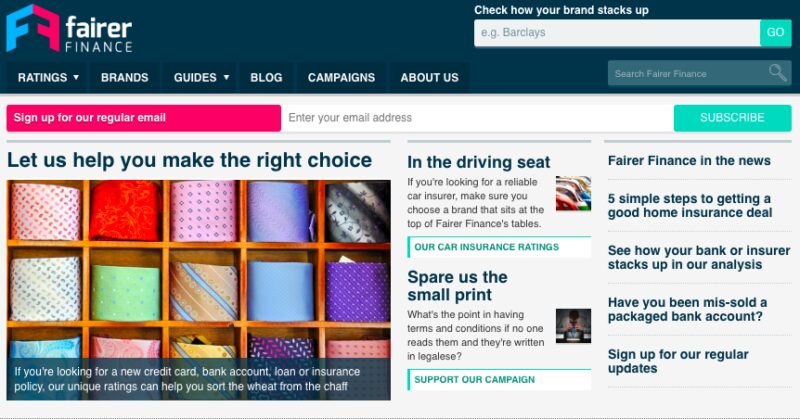 It's five years today since I quietly pushed our website live and started the life of Fairer Finance. The next day, the Mail on Sunday ran a full page showcasing our new ratings, and the phone hasn't stopped ringing since.

Call this a humble brag if you will - but I wanted to write a brief piece charting some of our successes and challenges over the last five years. I'm immensely proud of what we've done so far - but I'd be lying if I said it had been a breeze. Running a business with a social purpose is a bit like cooking with one hand tied behind your back - entirely possible, but quite a lot more challenging and there are some things that you just can't do (like chopping onions).

The price of independence

I've always taken the view that I'd sooner go bust than do anything that compromises our independence. And the good news is we're still solvent. In fact, we've now grown from just me to eight full time staff, and have worked with many of the largest banks and insurers in the country. Our consumer advisory board comprises of a team of ex-CEOs and financial services board members who stake their own reputations against our mission and independence.

We're regularly quoted in the press, and our campaigns have led to tangible progress. My proudest moment was meeting the Economic Secretary to the Treasury last summer, to be told that the government was going to act on our recommendations to regulate the pre-paid funeral plan industry. The following month, a government press release went out with a quote from us on the front.

One of the ways that we pay for our research is by allowing companies to buy licences to use our endorsements in their marketing. To be clear, they don't pay to get rated, and they're under no obligation to buy our endorsements.

We think there's no point in publishing ratings unless they have utility for customers, and the bar is set high enough that it's challenging to reach the top tier.

But by doing that, we have far fewer brands and products that qualify for our top endorsements than most other ratings services, which means far fewer people to talk to about buying a licence. Unsurprisingly, there's no interest in buying anything other than our gold ribbons and five star endorsements. A silver ribbon or four stars is seen as a sign that you're not quite good enough.

On the consultancy side, we've walked away from dozens of pieces of business because they didn't fit with our mission. On more than one occasion, we've been asked to write 'independent' research reports with pre-determined conclusions - or provide 'independent' supportive commentary for companies with new initiatives they have coming down the line.

We've also been hired by clients to give them honest, independent feedback - and then been fired when the truth was too hard to handle. One CEO wrote to me with the following comment last year: "I've long held the view that people who claim to occupy the moral high ground set themselves the highest of standards that they rarely live up to, over time."

That may well be true. But what a sad world we'd live in if no one tried to occupy it.

We've been threatened with legal action - and smeared on social media. And I was flattered to be personally targeted last year too - when some anonymous 'deep throat' sent a two page dodgy dossier about me to every national newspaper, with a picture of the second hand car salesman Arthur Daley at the top of it.

Investing for the long-run

But we've also made a lot of friends. High profile businesses who have been brave enough to let us in and asked us for challenging feedback. Companies who have used our services, and not had any expectation that we'll put down the phone the next time a journalist calls for comment on a bad story about them.

And for those businesses who we've worked with us, I think we've added real value. It's been an eye-opener for me being on the inside of companies, helping them make those same difficult decisions about how to make money whilst retaining their integrity. As I've written before, the economics of the insurance industry are incredibly challenging - and plenty of good companies make poor decisions because of that pressure.

But we've worked with enough businesses now to have real confidence in our belief that creating a consumer-centric culture pays dividends in the long-run.

We want to help build a financial services industry that consumers trust and value - and I know that's possible.

Five years in, I feel more confident than ever in the future of our business. Thanks to everyone who has believed in us and supported us this far.