The recent Community Access to Cash pilots have showed the potential of shared bank branches. But they are expensive, and are unlikely to appear on most UK high streets, in spite of their popularity 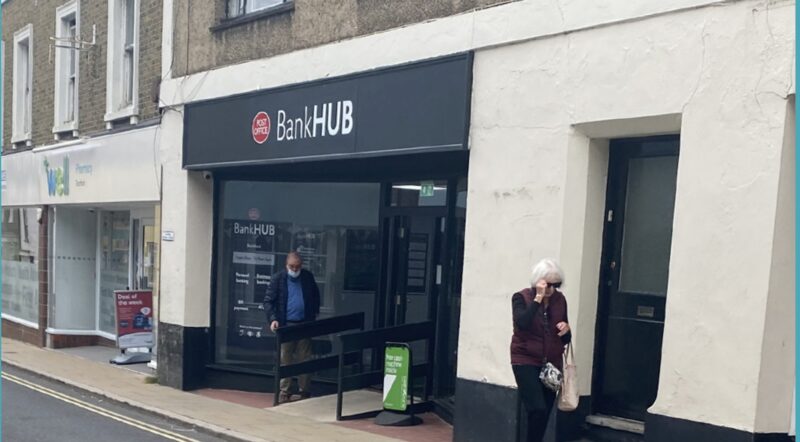 Bank branches have been closing at a rapid rate over the past few years. According to the consumer group Which?, around 4,300 have closed (or are scheduled to close) since 2015. That’s almost 60 a month.

For many, it’s not a problem. If, like me, you barely use cash and are comfortable doing all your banking digitally, what need is there to go to a bank branch?

But for a significant minority who rely on cash and face to face banking, the closure of branches - combined with fewer ATMs – is causing real problems. While for many local retailers, the lack of a local bank has led them to stop accepting cash altogether.

Over the last few years, I’ve been part of a stream of work looking at how we can manage the decline in cash usage, in a way that doesn’t leave the most vulnerable to pay the price. Without intervention, the likely picture would quickly be one where more people would pay to get their cash from ATMs, and where bank branches were all but extinct outside large town centres.

Since we started our work on the Access to Cash Review in 2018, good progress has been made in understanding the extent of the problem, and work towards a solution is underway.

Crucially, the government has committed to legislate to retain access to cash for those who need it. And the banking industry has sponsored a number of pilots across the country to explore new ways to meet communities’ banking needs.

Shared branches unlikely to be the panacea

Of the ideas being trialled, the one that has gained the most attention has been the new Bank Hubs in Rochford and Cambuslang – a joint venture between the major banks and the Post Office. These are new shared banking branches where customers from almost any bank can do their banking, and talk to a real adviser, just as they would in their bank’s own branches.

For many, shared branches are the obvious answer. While individual banks may struggle to maintain the viability of small branches with diminishing footfall, surely these pressures evaporate when resources are clubbed together?

Although in theory that’s right – the road from here to a world with hundreds of shared branches across the UK is not straightforward.

In case you missed it, shared bank services have already been part of our infrastructure for over four years. Good old fashioned Post Offices from Lands End to John O’Groats already allow customers to do most of the things you would want to do in a bank branch over their counters.

But negotiating how this is paid for has been a thorny issue. Two years ago, Barclays decided the arrangement with the Post Office – known as the Banking Framework – was costing too much, and announced plans to walk away.

The subsequent uproar led to a U-turn, but the Barclays episode laid bare the fragility of the arrangement.

Shared Bank Hubs, where everyone can do their banking, seem like a common sense solution. But given how difficult it’s been for all the banks to agree to work with the Post Office, it’s likely to be harder still to negotiate an even wider collaboration. And how challenging will it be to agree which community gets one, and which doesn’t?

In many communities, while the clamour from local residents may be for a shiny new Bank Hub, the most cost-efficient way to meet people’s needs might be a new cashback scheme at the local convenience store, or a deposit machine for businesses in a secure location. The reality is that only larger villages or towns now have the demand needed to keep even a shared Bank Hub viable.

The need for an independent commissioning body

The government has just closed its consultation on proposed cash legislation, which will define the minimum deposit and withdrawal facilities that are required to sustain cash access in our communities, and put a legal obligation on banks to provide them.

But if it is to secure an orderly transition to the new order – and not end up providing cover for a new larger wave of branch closures – it must also establish an independent commissioning body that decides what solutions are needed when a gap in the infrastructure is identified.

It should also force banks shutting branches to ensure the doors don’t close until the new body has had a chance to commission and install new services.

Given that competition laws rightly disallow banks from planning their branch closures together, without independent coordination we would likely see a slow decline in services, as banks leave towns one by one – isolating growing numbers of consumers. And a piecemeal response from individual providers is unlikely to provide the right long-term solutions for each community.

So an independent commissioning body – which can look objectively at the needs of communities and determine whether they really do need a shared Bank service – will be a vital part of the solution.

There is still much to be negotiated between the banks, and it’s important they retain a collaborative mentality and a shared desire to make the new model work. If the industry can unite behind a commitment to an orderly transition from the old to the new world order, it should open the way for banks to make significant savings in the long run. But they should only be allowed to realise these savings if those who rely on cash and face to face banking have been looked after.

This article first appeared in the Telegraph in October 2021