Victory for our campaign to ban charges for paying by card

The Treasury has confirmed that charges for paying by all cards - as well as Paypal - will be banned from January. Now we need to make sure these new rules are enforced. 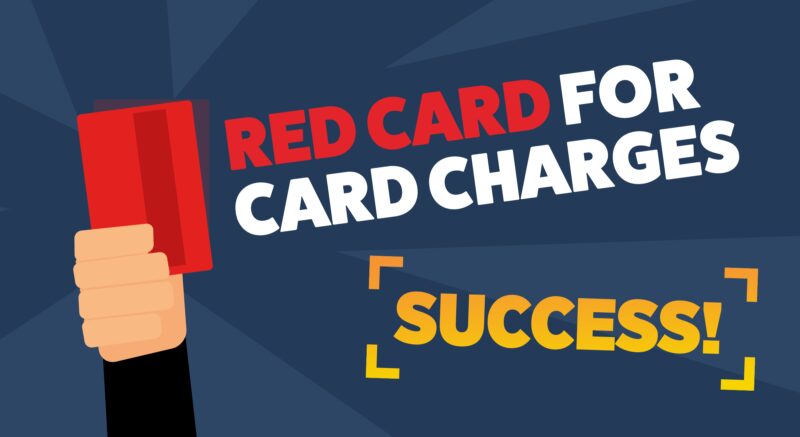 I've been campaigning to get charges for paying by card banned for the last six years. And today, the Treasury finally announced that new regulations will come into effect in January that will do just that.

Everyone wants to declare it as their victory - including Fairer Finance of course. But the truth is that today's result is the cumulation of a lot of different efforts over the last few years - and the biggest factor in today's announcement is an EU directive that says charging on all Visa and Mastercard payments has to be stopped by January 2018.

To give credit where it's due, however, the new Economic Secretary to the Treasury Stephen Barclay has decided to go further than the EU rules required. As well as banning surcharges for customers who pay by Visa and Mastercard, the Treasury is banning all surcharging, including for those who pay by American Express, PayPal or Apple Pay.

A few months ago, when the Treasury was consulting on how it would implement the Payment Services Directive 2, it made it quite clear that it didn't want to go any further than the EU had asked it to. You can read my blog here, which calls on them to reconsider.

But now that new rules are finally going to ban these charges, attention must turn to how they are to be enforced. If you've followed my blogs on this before, you'll know that new rules came into force four years ago, which banned companies from charging customers any more than it cost them to process payments. Those rules did away with most debit card charging. But a number of companies continued to pass on large fees for paying by credit card - well above the amount that their banks were charging them.

Flybe and Ryanair, for example, continue to charge 3% and 2% respectively for paying by credit card. We believe the actual cost per transaction for those companies is in the region of 0.6%.

It was down to Trading Standards to enforce these rules. But there was enough vaguery in them that they decided to let companies off the hook.

Come January, they will not have the same excuse. The new rules are unequivocal - NO SURCHARGING. But I very much doubt it will disappear entirely on January 1st. Trading Standards needs to work in conjunction with the Payment Systems Regulator to ensure that businesses are aware of the new rules, and stick to them.

I've already had emails this morning from small businesses, telling me how unfair these new rules are. And I do sympathise. Many small businesses are getting a raw deal from their banks - and when they pass on a charge of 2% or 3%, it's because that's what they are being charged.

But my hope is that this change will force businesses to start shopping around for a better bank. Interchange fees (part of the cost of processing a card transaction) were capped 18 months ago, but many banks have not passed those savings onto their small business customers. It is up to the Payment Systems Regulator to police this end of the market and ensure that companies are getting a fair deal. If they are not, both businesses and consumers lose out.

I do also want to make a counter-argument to businesses. How did we ever get to a world where we thought surcharging was a good idea? As I said in an email to a hotel owner this morning: "Some of your customers use a new towel every day. Some of them recycle the old one. But you don't charge a towel surcharge."

The truth is, all customers have a different level of profitability. And how they pay is just one factor.

As for Trading Standards, I have some sympathy for them. They have been subsumed by Councils, and are struggling from the funding squeeze that has been imposed on local authorities over the past seven years. Nevertheless, it's worth restating that there's no point in having rules if they are not enforced. Trading Standards needs to be given the tools to do its job.

So a victory. And we can definitely take some credit. Let's hope we don't have to wait till January until big brands such as Flybe and Ryanair fall in line.