How can the insurance industry avoid getting sucked down the plughole?

Price competition in the insurance world has led to a race to the bottom on standards and a rise in complexity and bad outcomes. Time for the S.O.S. signal to be sent out. 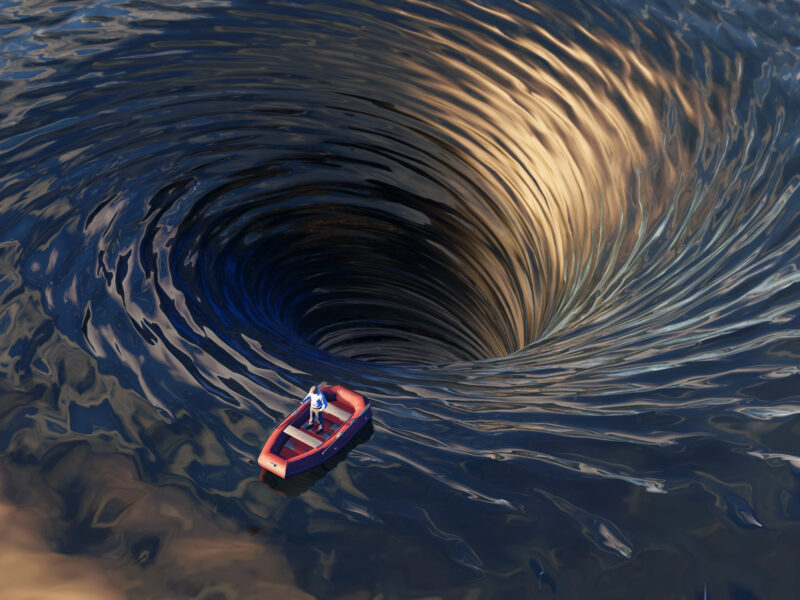 This article first appeared in the Telegraph, on the weekend of 2/3 March 2019

Being a modern day consumer can be exhausting. While the internet has brought us choice and competition, it’s also forced us to make many more complex choices on our own.

Not so long ago, people had a personal relationship with their bank manager, who would help and advise them on their most important financial decisions.

Today, most of us set up our bank accounts, savings accounts, insurances – and even mortgages – without any kind of financial advice and support. And to make matters worse, the explosion of choice and competition has brought with it ever greater levels of complexity.

In the world of food and consumer goods, the response to added competition has been to gradually shrink products. We’ve all read stories about smaller Toblerone bars or toilet rolls with less sheets – all for the same price as before.

In your supermarket, what this tends to amount to is a covert price rise. You run out of your essentials quicker and need to buy more.

But in the world of financial services, the result of increased competition can be altogether more sinister. Insurance products, like toilet rolls, are also magically shrinking. But the result is that comparison sites’ are stacking an increasing numbers of sub-standard policies on their metaphorical shelves.

How low can you go?

Travel insurance has become the very worst for this. Of the 650 or so travel insurance policies that we rate, just under 50 now have cover of £3,000 or less for flying your body home if you die abroad. For many people that simply won’t be enough. Which is why there’s been a slow trickle of bad news stories about insurers forcing families to pay up to fly their deceased relatives home.

More than a third of travel insurance policies won’t pay to get you home or to safety if you’re caught up in a natural disaster.

And many of the largest travel insurers won’t pay for your medical bills or relocation if you end up being a victim of a terrorist attack.

For me, none of these should be optional extras on a travel insurance policy. Insurance is there to cover you against the unexpected. And while terrorism and natural disasters may be all the more common in the modern world, the number of British holidaymakers who end up dislocated by these every year is miniscule.

Competition against the consumer

But competition is so fierce in this market that insurers are looking for any way possible to cut down their costs. If they don’t keep their prices low, they don’t get to the top of the comparison site table and they don’t write any business. And in the decision around where to cut costs, fairness and ethics often don’t come into the mix.

A single trip travel insurance policy can set you back as little as a few pounds these days. But the truth is it’s all but impossible to offer a good value policy for that kind of price.

And perhaps more alarmingly, this trend of hollowing out insurance products is only half of the problem.

The other dimension of the downward spiral on price is an increased ferocity when it comes to handling claims. Insurance is, essentially, a promise. And the policy document tells you what’s being promised and what isn’t.

But how do you know whether your insurer is any good at actually keeping its promises?

Race to the bottom on standards

Last year, the terrifying story emerged of one of the UK’s largest travel insurers allegedly handling claims in ways that endangered the health, and even the lives, of their customers. To manage the cost of claims, the insurer was alleged to be employing a doctor who would make decisions that were often not in the customers’ best medical interests. And in the most extreme cases, customers had died.

Amongst the travel insurance community, there’s often a shrugging of the shoulders when stories emerge about reckless claims handling or hollowing out. On more than one occasion, senior people in the industry have said to me “Well what do people expect for £10?”.

The answer to that question is that people expect to be covered for the unexpected – and have no idea what the right price is for that. If insurers can’t offer reasonable levels of cover for £10, then they shouldn’t be selling policies at that price.

Regulation to the rescue

The solution to these problems is going to have to come through regulation. In my view, there needs to be some minimum standards for these products. It’s simply not ok for customers to buy insurance and then find out at claims stage that they weren’t covered for the basics.

As for ensuring better standards at claims stage, we may need to see the comparison sites using their muscle to put pressure on insurers to raise standards. If I was running a price comparison site, I wouldn’t want to be selling the products of a business that was treating its customers recklessly.

At the moment, the comparison sites have a bit of a don’t ask, don’t tell approach to these problems. Consumers may soon demand more.